The enchantment of the Roman Villa in Positano

The Roman Villa of Positano

When the remains of a luxurious domus were found in Positano it was clear that it was big deal and today the Roman Villa stands as a testimony of the past located right in the center of the city.

Sumptuously restored after the earthquake of February 5 62 d. C. and re-proposed in 2018, the Domus presents a luxurious triclinium where frescoes of great scenic impact dominate with sea monsters, darting dolphins, stucco cupids and mythological scenes.

This way Positano is giving not just one more evocative postcard, but also an effective new image of art and culture in Amalfi Coast.

This ancient dwelling, besides being an extraordinary testimony of the past of the town and an important piece that adds to the cultural heritage of our country, has an enormous historical value, as it is thought that precisely from the name of its owner, Posides, derives the name of Positano. 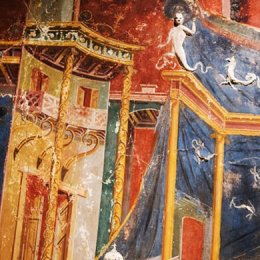 Posides, as its owner was probably called, was a freedman of the emperor Claudius and had a lavish leisure villa built in a spectacular location, just a few hundred meters from the beach, right in front of the Li Galli islets.

A magnificent triclinum emerged from the excavations, a veritable showroom of about 35 square meters, with walls that are 5 meters high. For now, this environment located under the crypt, in the lower part of the church, is the only visible area of ​​the villa, but further excavation campaigns are planned, which will surely give us more surprises.

Allover the scene stand mythological animals, winged horses, elegant peacocks, birds and sea snakes. Some flashes of white are given by the high reliefs in stucco inserted in a triumph of splendid and precious colors: the famous Pompeian red obtained from cinnabar, the green from copper and the blue from malachite and lapis lazuli.

In the intermediate part, instead, there are panels with a monochrome background decorated with some mythological scenes, such as a picture of the centaur Chiron who gives lira lessons to the young Achilles in front of Dionisio, up to the woman with child and the locus amœnus, a landscape marine in which a bay with sailboat and fisherman is depicted, surrounded by arcaded buildings.

Amalfi Coast has many archaeological sites to discover such as Pompeii and Herculaneum and now Positano has added even more value to itself. Have a tour and walk through history! 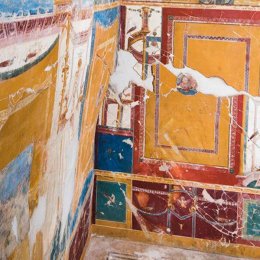