Religion and tradition together in Sorrento in the Holy Week

Sorrento and the other towns and villages of the Sorrentine Peninsula are rich of strong historical traditions in the Easter period. In particular during the Holy Week, that is the week before Easter, a series of processions which commemorate the death and the passion of Christ are organized. They celebrate the resurrection and go back to the ancient traditions of the penitential Christian rituals in Medieval times. This tradition dates back to 1300.

The singing in the Gregorian style, preceded by exercises that begin two months before, and a long procession of hooded men of every age (the children participate, too) are organized by different religious confraternities.

These processions are made in Sorrento and in other neighboring municipalities in the evening of Holy Thursday and in the evenings and nights later. The members of the Confraternities, with caps and black habist, which in some processions can also be white or red, parade through the streets of the center accompanied by imposing choirs.

The city of Sorrento organizes in particular two processions, the ‘White’ and the ‘Black’.

The white procession organized by the Confraternity of Santa Monica takes place in the heart of the night between Thursday and Friday of Holy Week: the procession of the confreres parades behind the statue of the Madonna that goes in search of Jesus.

It is the suggestive prelude to black procession, organized in the evening of Friday from the Confraternity ‘Death and prayer’, in which both the habit of hooded and the dress of the Madonna are black, the color that represents the painful discovery by Mary of the dead son.

The hooded carry small lampposts or other symbols of the Passion of Christ and parade among the crowd that assists in silence, involved in symbolic tension in the scenic representations of the death of Christ.

The symbolism of the processions in the Holy Week succeeds in engaging local people and tourists, today as yesterday, in an exceptional way: it is a show that literally thrills everybody! 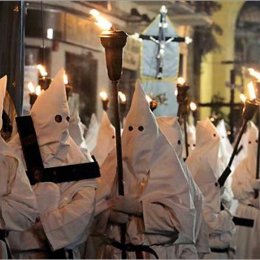