Naples to Pompeii to Positano

Italy has much to offer, apart from the main cities, the natural panoramas in some parts of the peninsula take literally the breath away. That’s probably why, since the era of Intellectual Enlightenment, Italy has been given the name of ‘Bel Paese‘ (Beautiful country) where healthy people from all over Europe used to have their grand tour. Naples and Positano figure for sure among the most ancient and suggestive coastal reality in the country, and, not far, stands another great chapter for the whole human history: the ruins of Pompeii.

Transfer from Naples to Positano with stop in Pompeii

If you are traveling in direction of Positano from Naples, be aware that if you are not stopping in Pompeii, you are missing the incredible opportunity to have a journey in the past, throughout the Roman Empire till the eruption of Mount Vesuvius in 79 AD that provoked the death of an entire city.

There are many choices you could pick up from to have a full experience of what Campania region in Italy can give tourists, you could choose a transfer from Naples to Positano with stop in Pompeii for example.

You could stop by during your exclusive transfer for a couple of hours, just the time to see what everybody speaks about: the incredible ruins of Pompeii, before coming back to the car in direction to Positano. Sounds nice, doesn’t it?

Naples to Pompeii to Positano

Why Pompeii is so peculiar that it is worth a stop while going to Positano? The cultural and historical heritage given by this place is undeniable: walking in the ancient Pompeii is possible to see with your own eyes how life was during Roman Empire: the rests of the shops, the paintings, the streets… and the people. There are many bodies that, covered in ashes, during the eruption, have been preserved perfectly for all this time.

Having a transfer from Naples to Pompeii to Positano is definitely the best way to ensure a perfect journey avoiding the risk to miss the incredible beauty of these places! 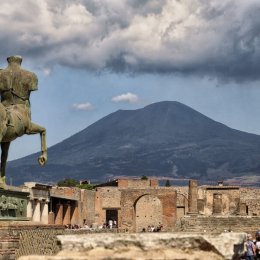