A unique fragrance spreading throughout the house whenever it is in preparation. What are we talking about? Coffee, of course. There’s a famous quote by Eduardo de Filippo who stated: “When I die, bring me some coffee and you’ll see that I resurrect like Lazarus”. Indeed, all joking aside, it is this drink’s energizing property that reconcile almost all the generations. Certainly one of the habits that the Italians will never quit is exactly the “coffee break”, whether they are at home, at the office or a simple excuse to meet each other in gathering places. The tradition, especially in the South of Italy, labels the “coffee-moment” as a mandatory after lunch step, mainly for its digestive qualities.

Its origin comes from Southwest Ethiopia and the quality of the coffee depends on the thype of plant, namely on its height, its leaves, or on the flower’s smell, for example. It is said that his discovery was due to a shepherd called Kaldi: as habit, he took all the goats to gaze, but one day they ran into a coffee plant. They ate berries and leaves and this determined an extraordinary effect on their bodies since, in the evening, they were found roaming with an unusual energy and vivacity. That would have been fun to be there to see this one of a kind scene, definitely. Consumption is much more frequent among men than among women as it seems that its necessity increases as the man becomes adult. An information that many ladies will appreciate is that the coffee, if taken without sugar and milk, contributes to the lipolytic effect, that means, it helps burn faster fats absorbed during the day. Whether you drink it with friends or alone, it is important to consider both the positive and negative effects related to its intake. Between the positive effects and, besides the more common ones, there is certainly a high probability of reducing prostate cancer. Among the negative ones, if taken in excessive amounts it can lead to sleeping problems. In a certain sense even the coffee regenerative moment changed habit, and the tradition associated to the mandatory ritual in the classic Neapolitan ‘mocha’ today has become a pleasure that is tasted in a hurry, especially if you’re at work: that’s the input that led to the invention of the coffee pods. Times change and the coffee varieties increase, but what will always be the same is that we will never quit our favorite habit: ‘ a tazzulella e’ cafe’ (the cup of coffee). 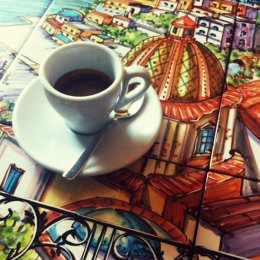