A Brief History Of The Amalfi Coast

Now, Italy’s Amalfi Coast is best known for being among the nation’s most important tourist destinations with its lavish Amalfi villas, breathtaking accommodations that attract each year tons of tourists from all over the world. Alongside Venice and Tuscany, this stretch of shore recalls tourists into Europe every summer, using its mixture of beaches, walking paths and history.

Indeed, it’s not just about the sea and the weather: there is a great heritage coming from ancient populations who left – in the many monuments located allover the coast – the proof of their presence on the territory.

A part of the ancient history of the region is related to the awful and gruesome happenings in Pompeii and Herculaneum, but we don’t actually know much about its origins. Anyway, in comparison to those tragedies,  the destiny of Amalfi has been much luckier than those of the other cities.

In old times this piece of land was part of the Roman Empire, the proofs of that stands in the many villas located along the coast, especially in Minori. In year 839 Amalfi was conquered by Princedom of Salerno, but for short time. After just few months Amalfi was annexed to the Roman Empire again, but this time it acquired autonomy becoming the Repubblica di Amalfi.

In 1136 the Normans conquered the city and introduced it into the Kingdom of Sicily, in which it’d be part for the upcoming centuries.

During the Middle Ages Amalfi kept a certain importance thanks to its maritime traffic and its powerful commercial fleet. Between the 300 and 400 there was a huge decline in Amalfi history, and the beauty of the coast was brought back to light with the Grand Tours of the XVII century.

After the Normans, it may have appeared that the destiny of the city was already decided for the bad, however, the reverse was true: a change in luck happened and the city started to rise from the ashes. Amalfi decided to concentrate on tourism, becoming one of the major attractions of Italy. Through the 20th and 19th centuries, the area continued to expand getting more and more close to  what it has become now. 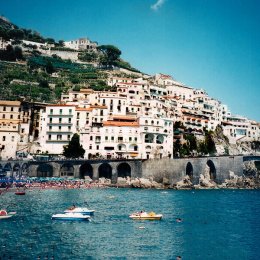